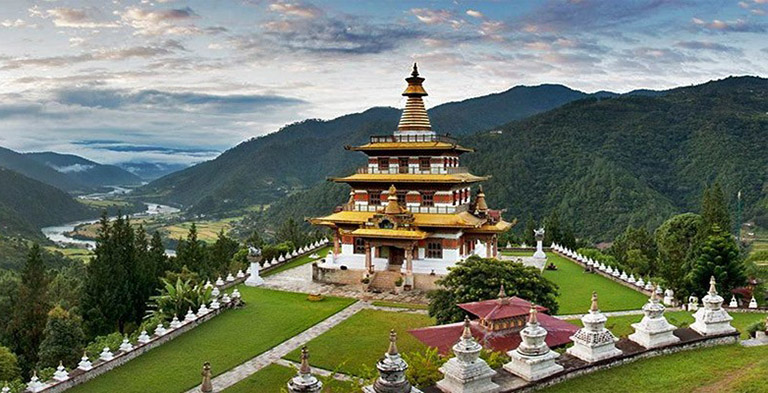 Bhutan is a fabulous travel destination, a magical ancient kingdom with beautiful scenery and a fantastic history. The prominent Buddhist sacred site and temple complex is situated on the cliffside of the upper Paro valley. This beautiful site in its dramatic location is also known as ‘Tiger’s Nest’. The temple complex, properly known as Taktsang Palphug Monastery, was built in 1692 around the cave Paro Taktsang, where the man credited with bringing Buddhism to Bhutan, Padmasambhava, spent three years, three months, three weeks, three days and three hours meditating in the 8th century.

Jigme Dorji is a National Park located in Bhutan and is one of the top travel destinations in Asia for wildlife. This park is the second largest national park covering the districts such as Gasa District, Thimphu District, Paro District, Punakha, and Wangdue Phodrang Districts. Why Jigme Dorji National Park is famous because, it has the best of both worlds, including wildlife, there are cultural sites within the park as well. In fact, the park consists of about 6,500 people living within the park taking care of the agriculture and animal husbandry; it has been listed as a tentative site by the UNESCO. However, aforementioned national park is home to various flora and fauna. Here, there are about 37 known species of mammals as well as endangered species such as clouded leopard, snow leopard, takin, Bengal tiger, Himalayan blue sheep, Himalayan black bear, black musk deer, red panda and Ussuri dhole. Nonetheless, this national park is also home to the sambar, serow, barking deer, marmot, goral, pika and more than 300 species of birds. Jigme Dorji National Park is the only park that has national animal – Takin, National Flower – Blue Poppy, National Bird – Raven and National Tree – Cypress existing together in the same premises. These features make the park one of the best places to visit in Bhutan.

The Royal Bhutan Airlines (Drukair), is the national carrier of the Royal Government of Bhutan, operating to nine cities in six countries. Since 2006, DrukAir operates three Airbus A319 and one ATR 42-500 as of September 2013. Druk Air operates daily flights to Bangkok and regular flights to Delhi, Kolkata, Kathmandu, Dhaka, and most recently in 2009, Bagdogra and Gaya. In 2012, Drukair added Singapore route in 2012 and Mumbai route in 2014. See more details on Drukair.

Dochula Pass is a beautiful pass consisting of 108 Chortens or Stupas, built in the memory of the Bhutanese soldiers who died in a war against the insurgents from India. The beautifully built temple and stupas, with the picturesque Gangkar Puensum peak in the background, makes the Dochula Pass one of the most beautiful tourist places in Bhutan. Dochula pass is situated at on the way to Punakha and Thimpu. This very pass is a popular location for every tourist who visits the country. From the pass, you can have a panoramic view of the Himalayan mountain range, and you must know the view is very beautiful from the top. You will get to see the snow covered mountains and the amazing backdrop of the place. So many Bhutanese families enjoy their holidays in this area, they have small picnics, and some just come here to enjoy the view. You can have pack your lunch and have tea in a flask and come here to enjoy the food and hot tea.