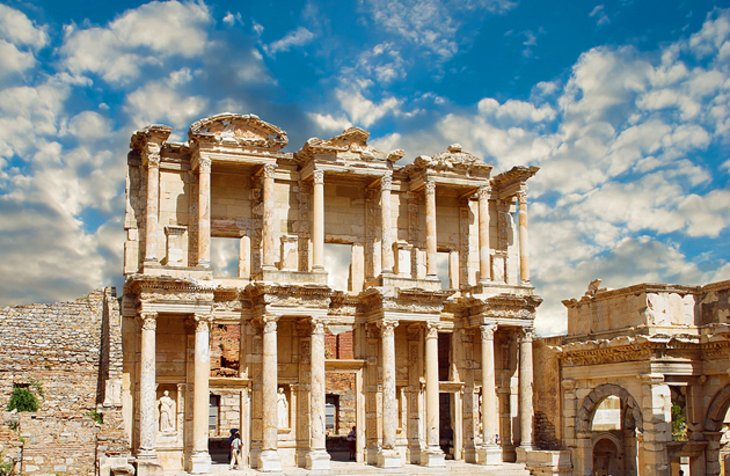 What can you see in Turkey and Ephesus

Fabulous Turkey … the location at the center between East and West influences. Ayasuluk Fortress sits on the hill high above Selçuk. This hilltop site has been settled since the Neolithic period, but the fortress dates from the Byzantine era and the fortifications were extended by the Seljuks. The mighty enclosure wall had 15 rectangular towers. Within the walls are several remnants of houses and a small Seljuk mosque. The views over town and the surrounding countryside are wonderful from the hilltop, making a trip here well worth the uphill walk. Archaeologists are still excavating the site, so it is sometimes closed to visitors.

The ruins of Ephesus are a popular tourist attraction on the west coast. The city of Ephesus was once famed for the Temple of Artemis, one of the seven wonders of the ancient world, which was destroyed by a mob led by the archbishop of Constantinople in 401 AD. Some of the structures can still be seen however including the Great Theater and the Library of Celsus. The library was built around 125 AD to store 12,000 scrolls and to serve as a monumental tomb for Celsus, the governor of Asia. The facade was carefully reconstructed in the 1970s to its present splendid state from the original pieces.

Renowned as one of the most beautiful buildings in the world, the spellbinding Byzantine glory of the Aya Sofya Museum (Hagia Sophia) is not only one of the top things to do in Istanbul, but also in Turkey. The staggering bulk of its exterior is rimmed by the delicate minarets added after the Ottoman conquest, while the sumptuous and cavernous frescoed interior is a grand reminder of old Constantinople’s might and power. This famed monument is a must-do for every tourist visiting the country.

Turkey is awash with ancient cities, making it tough to select just one for this list. However, the most popular of these attractions is Ephesus near modern Selcuk. It contains some of the best preserved Greek and Roman ruins in the world and remains a well-trodden part of the tourist trail from nearby resorts such as Kusadasi and Izmir. Some of the most impressive attractions at Ephesus include the Library of Celsus, the Temple of Hadrian and the ancient theatre. Many visitors will explore this city in combination tours with Miletus, Didyma and Priene.

The region where Ephesus is has dry and warm summers, mild and sometimes rainy springs and autumns and short, cool winters. This means you can visit Ancient Ephesus all year round. Ephesus visiting time is between 8.00am to 17.00pm in the summertime and between 8.00am to 19.00pm in the winter time. We suggest you start your Tour of Ephesus early in the morning when it is cooler, an not so much sun, wear protective cream and cover up from the sun. Entrance fees to Ephesus are approximately $11.00 per person, and an entry fees of $7.50 is charged for The Church of the Virgin Mary these prices can fluctuate seasonally and depending on exchange rates. Many Ephesus Tours will include both entrance fees and usually include lunch. Souvenirs are typically priced in USD, and they are not cheap at the sites, water and food are also a little more expensive around $5.00 – $10.00 for a sandwich. More details about Ephesus private tours.

The Basilica Cistern has been providing Istanbul residents with water since the sixth century when it was ordered built by the Roman Emperor Justinian I. A visit leaves travelers raving about the technology the ancient Romans used to build this architectural wonder that was very advanced for its day. The underground cistern, just a few steps away from the Blue Mosque, was built on the site of a basilica that was constructed in the third century. Known as the Sunken Palace, the cistern can hold up to 2.8 million cubic feet of water. The cistern is one of the locations used in From Russia with Love, a James Bond thriller filmed in 1963.